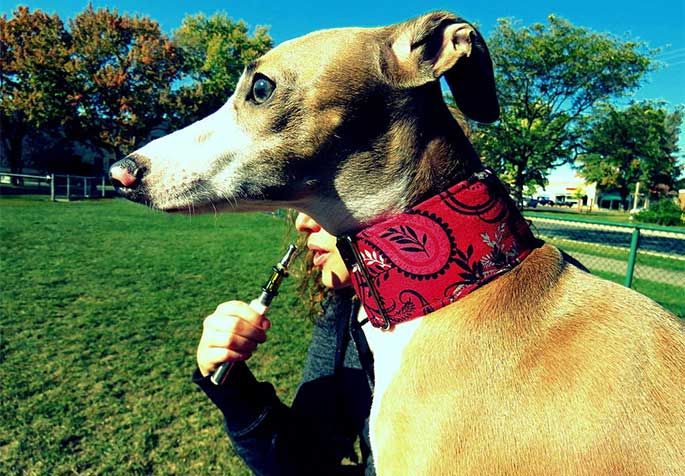 How Dogs React On Vaping Smell and Its Causes

Most people consider their dogs as family members. As such, they do most things with their pets in mind. However, some people that vaporize do not pay much attention to how their dogs react to vaping smell. Nevertheless, dogs detect a smell from vaping devices and respond to it.
It’s, therefore, not surprising that the manufacturers of most e-juices advise their uses to keep them away from pets and children. When a person vaporizes, they can produce vapor that can be harmful to other family members and pets as well.

Perhaps, the most important thing to note is that some dogs have undergone training to detect almost everything. It includes the aura that usually precedes individuals when about to have seizures and the subtle odors that people emit when they have cancerous tumors. Some dogs have been trained to detect drugs. These can smell drugs and illicit substances from a distance. Such dogs can easily detect a weed pen if it is used around them.

How Dogs React to Vaping Smell

Dogs can detect different substances, including drugs and other illegal substances. When a dog catches a smell, it responds the way its handler wants. For instance, if a dog detects vaping smell, it can react by barking. A dog can respond this way when it detects a weed vape pen in use for the first time. That’s because most dogs are trained to detect and alert owners of illegal substances like cocaine, LSD, peyote, methamphetamine, and marijuana in some states.

Other reactions may include touching the source of the vaping smell with a nose and sitting in front of the place where the smell is coming from. A dog can also stay where it senses the smell until its handler comes. It can also dig or paw the place where it detects the scent.

Some dogs are trained to smell illegal drugs and narcotics only for purposes of locating them. As such, they may not detect a vaping device if it is used to vaporize nicotine or tobacco only. Thus, the dog might not alert the handler if it detects the vaping smell of a nicotine vape.

But, even dogs that have not been trained to detect and locate drugs are very observant. Naturally, dogs gather information based on the mood, emotions, posture, and behaviors of humans around them. A dog can detect a tine, acute change in human physiology. That’s because every turn in the body produces a specific odor. The scent that a person produces may be impossible for humans to detect. However, dogs pick them up with ease.
For instance, after using a dry herb vape pen, a person can exhibit some changes in behavior. What’s more, they can get potent the smell of weed. The dog may even notice the smell and difference in behavior.
Some researchers have even argued that dogs can notice or smell high blood pressure in people that have used methamphetamine.

Other ways some dogs react to vaping smell include circling the vaper, as well as, showing excitement and focused attention.

Dogs have an incredible sense of smell. Scientific research has even been conducted around canines’ sense of smell. Some breeds of dogs have higher sniffing abilities than others. For instance, German Shepards and Bloodhounds are great at sniffing.

Mostly, dogs have a tissue fold in their nostril. This fold diverts air once it enters the nostril to follow separate channels. One channel analyzes the scent while the other one facilitates breathing. But that’s not all.
What makes canines stand out is the presence of 220 million receptors inside the nose. Humans have around 5 million receptors only. What’s more, canines have a more specialized organ known as the vomeronasal. This organ is responsible for their enhanced sense of smell.

The Risks of Vaping Around a Dog

The risks associated with exposure to secondhand cigarette smoke have been documented over the years. But, vaping is a relatively new phenomenon. That means nothing much is known about exposure to secondhand vapor. But, some of the risks of secondhand vapor exposure in humans are likely to be the same for dogs.
Some researchers have suggested that using a dry herb vaporizer pen can produce vapor that is as harmful as smoke. Some studies have shown that vaping devices provide small exposures when compared to traditional cigarettes. As such, vaping emissions may not pose a health risk based on the analyzed compounds.

Nevertheless, pet owners should act responsibly to ensure the safety of their pets. Pets can quickly inhale the vapor they exhale when vaping. They can also get it from the areas where they vape and surfaces of couches and carpets.

This vapor can cause skin allergies, cardiovascular problems, respiratory illnesses, and cancers. Necessarily, a person can potentially lose a dog if it inhales excessive amounts of vapor. These are some of the reasons why responsible pet owners avoid vaping around their pets.

Dogs react to vaping smell in different ways. Some can alert their handlers, sniff around, circle around the vapor, paw the vaping device, touch the object that has the smell, or show excitement or focused attention. Nevertheless, the reaction of a dog depends on the substance that a person vaporizes and what it has been trained to detect. If marijuana is among the elements that a dog has been trained to identify and locate, it will respond to the use of even the best weed vape pen. This response is due to the strong sense of smell of canines.

How Much Does Dog Grooming Cost? A Guide on the Average Prices

How to Handle a Dog Emergency During COVID-19