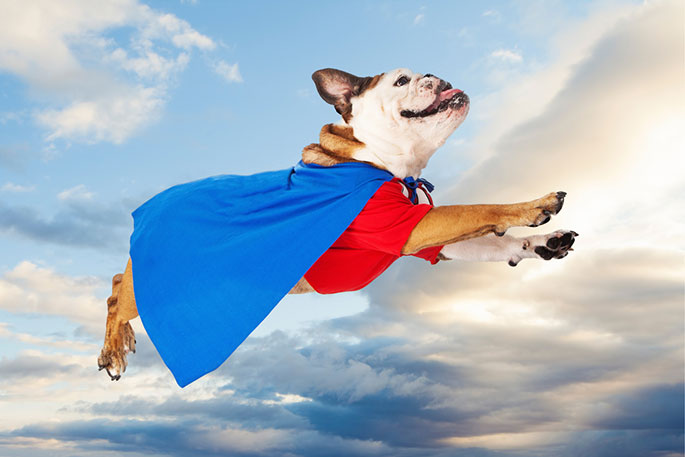 3 Ways That Dogs Are Superheroes in Disguise

Dogs have long held the title of man’s best friend. However, they often go above and beyond their duties of providing companionship. Dogs carry out numerous tasks in society that extend further than being the household family pet. They may even hold the title of favorite family member, but we’re not trying to start family drama here.

The roles dog play in our lives vary far and wide. From acting as guide dogs to being companions that provide emotional support, they stick with us through thick and thin. Some even solve crimes! Not quite like Scooby-Doo, but enough for us to include it in this list. Dogs are incredible animals. Though we could list a million ways they make the world a better place, here’s just three that illustrate the blessings of our favorite four-legged friends.

With the severity and prominence of mental health issues on the rise, the need for Emotional Support Animal (ESA) is spiking, too. These animals aren’t just exclusively dogs. There is a wide variety of animals that can perform the role of emotional support. However, due to their natural friendly nature, dogs are a popular choice.

Pets have always supported us in times of emotional discomfort, particularly the ever-empathetic dog. Emotional support dogs take this role to a whole new level. The most common need for emotional support dogs is to alleviate the symptoms of a severe anxiety disorder or depression. These canine companions provide irreplaceable comfort to sufferers across the country.

In the United States, alone there are over 3.4 million people registered as blind. Impairment of sight is a highly debilitating condition that can bring with it a whole host of challenges. Thankfully, there are just over 2000 guide dog organizations based in the US. All these canines are all thoroughly trained to minimize the challenges a sight-impaired individual may face.

Reared from being puppies to perform their role, guide dogs are some of the smartest and most trustworthy animals out there. They receive extensive training for a variety of situations that they will one day have to navigate in the real world with their assigned owners. This means that when the time finally comes for them to do what’s required, they are more than prepared.

A common assumption about guide dogs is that they are only useful for helping visually impaired people navigate streets. However, the truth is that their role is far more complex. While navigation is a big part of their job, they also assist with daily living within the home. Some even open and close doors and judge the height and width of objects, so their owner doesn’t bump into anything. They’re clever pups.

From visual guidance to emotional support, now to defending the word of the law: dogs do it all. Police dogs are specifically trained to deal with a variety of crimes. They have been helping to solve numerous cases for decades now. Whether it’s using their powerful snouts to help locate a missing person, or holding a criminal hostage with their powerful jaws, police dogs know what’s up.

Similar to guide dogs, this job isn’t for the entire species. Some just aren’t cut out for it. It requires a certain commitment, discipline, and ferocity to make the cut. German Shepherds and Dutch Shepherds are both highly popular police dogs. They combine strength with discipline, handed down to them from their days of herding animals.

Whatever role a dog performs, they’re a superhero to somebody. Sometimes just being the family favorite is task enough!

Help your Dogs to Get Freedom from Fleas

6 Reasons Why Pets Are Good for Your Health